Cathedral Rock Park could easily earn a spot on many lists of favorite San Antonio parks, but surprisingly it does not. Hiking at the park involves significant elevation changes, multiple difficulties, and various terrain. It’s a great place for beginners, families, and it’s dog friendly. However, there are a few more challenging areas which are optional.

Things to Do at Cathedral Rock Park in San Antonio, TX

Surprisingly, there are not any exercise stations at Cathedral Rock Park. Most of the popular San Antonio parks contain exercise equipment to improve our health and fitness. As a personal trainer, I definitely appreciate that aspect of the parks.

If you enjoy working out, the playground can be used for pushing, pulling, and lower body exercises while the kids are playing. The park also contains several rocky areas that can be used creatively as well. Additionally, there are plenty of trails to run or bike in this park.

How to Get to Cathedral Rock Park

Cathedral Rock Park is located on the west side of San Antonio. More specifically, the entrance is along the south side of Grissom Rd, just east of Culebra Rd in the Pipers Meadow neighborhood. Even though it is between several subdivisions, the park seemed quiet and peaceful during our visit.

The parking lot is very small, and it was packed on a weekday morning when I arrived. I can only imagine how it might look during the evening, or on the weekend. There were only a few kids using the playground, and most of the vehicles were not equipped to carry bicycles, as far as I could tell. Eventually, we noticed a group gathering in the area which is probably known as Cathedral Rock.

There are three different types of terrain at Cathedral Rock Park. The easiest of the three would be the concrete path which stretches from the parking lot to the Leon Creek Greenway.

Several short, nature trails extend from the entrance to the park. These loop through the woods and provide an additional challenge. The most difficult surfaces in the park are the rocky areas, which are optional. The trails are dog friendly, and my girl is pretty good at climbing the rocks.

We began our hike with the nature trails because they tend to be more adventurous. I was surprised to find nearly a mile of trails forming loops through the woods at Cathedral Rock Park. After viewing the area online I expected to find a simple greenway trail. However, the park had so much more to offer.

Eventually we hiked along a trail which led us into the woods and seemed to end. We continued toward the creek which had some stagnant water. I noticed a pipe running alongside the creek in this area which is paved similar to a walkway. It appeared as if Cathedral Rock Park had its own deteriorated riverwalk. We crossed a dry section of rocks in search of more interesting finds and were not disappointed.

A Camp or Fortress?

We followed the creek away from the underpass and circled around back into the woods. I noticed garbage in the woods and on the trees. A closer inspection revealed that the garbage may be someones camp!

We found a large piece of torn plastic draped around the tree branches. A large piece of foam was leaning against the trees, along with a kiddie pool. There also appeared to be remains of a campfire. However, we did not come across the person who had erected the camp.

We have been through wooded areas all around San Antonio. I often expect to come across a makeshift campsite, but have not – until today. It’s entirely possible to live outside because of the warm climate. Of course, this may have been setup by kids as a fortress. I vaguely remember accomplishing similar tasks in the woods where I grew up.

We crossed back over the creek and found more nature trails to the east as well. Kids were making noise on this side of the park. As we drew near we found them gathered in a lower area between walls of rock. This must be “Cathedral Rock”, but I was unable to find any historical information on it. Apparently, this is a popular gathering place for groups and families.

After hiking through the woods and seeing the greenway, this area was a unique sight. It is not anything like Cathedral Rock in Arizona. I’m guessing it must have gotten its name for some other reason than its shape.

Since a group was currently using the gathering space we decided to continue forward. We immediately found a bridge crossing the lower area, which probably carries runoff water to Leon Creek. There are a lot of rock formations in this area.

South of the bridge it is possible to access several rocky areas as well as the creek. This is exactly what we did. Abbey moves along the rocks like a champ. We saw a man sitting on the largest rock formation admiring the park. We circled around the area and found the creek bed around the backside. The creek is blocked by a manmade dam that you can use as a path.

I wondered what the creek looks like during stormy situations. We traveled down into the creek bed and back up to the dam. I looked to the south where the water would be if it were present. We almost hiked in that direction, but chose to follow the concrete greenway path instead.

The concrete walkway extends about a mile to the east from Cathedral Rock Park to the Leon Creek Greenway. We followed the semi-shaded path and Abbey noted the squirrels along the way.

Eventually the path crosses an area filled with white rocks. This must be a creek crossing, but there is no bridge in this area, only the sidewalk. As I looked to the east I saw a sea of white rocks.

We continued along the path which seemed less polluted by noise than many areas of the greenway system. After walking a mile along the concrete path we found a dog friendly fountain, and neighborhood access.

Luckily the fountain was active because Abbey loves drinking water outside. I took a second to look at the trail map and Abbey decided to jump up and strike a pose!

Continuing on from there you will reach a fork in the road at the Leon Creek Greenway. If you head left you will make your way to the Grissom Trailhead. If you turn right you can head toward the Shadow Mist Trailhead, or continue south along the greenway. I decided to hike back toward Cathedral Rock Park, and checkout the area in which the group had gathered.

We hiked back to the park enjoying the nice weekday morning. We didn’t see any bikers on the path. As we came back across the bridge the group of families was leaving the area. We approached Cathedral Rock where some of the kids expressed a desire to pet, Abbey. She tried to back away from the situation because there were so many kids gathering around.

We escaped the group and took a minute to view the rock wall. There is a trail to the left, but it didn’t seem to lead anywhere when we followed it. We hiked back toward the parking lot in search of the parks history, but it was nowhere to be found. Our journey through the park was fun and surprising. I saw many things I did not expect to see, which often happens while hiking in San Antonio.

If we lived nearby we would visit Cathedral Rock Park on a regular basis. This is definitely one of the best places to hike with your dog in San Antonio. If you are looking for other dog friendly parks on the west side, there are some nearby which are good for hiking. Tom Slick Park is a few miles to the south along HWY 151, and OP Schabel Park is a few miles north next to Bandera Rd. 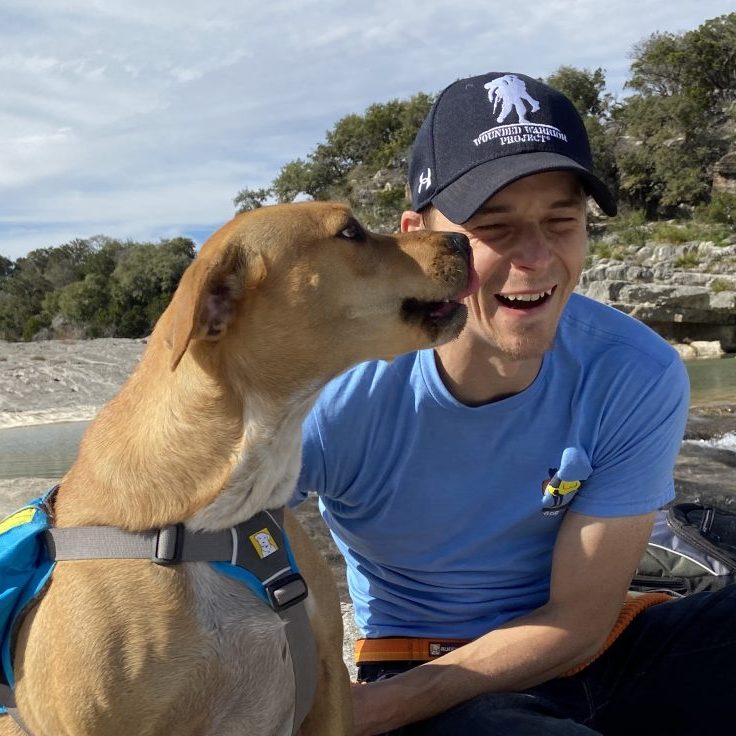